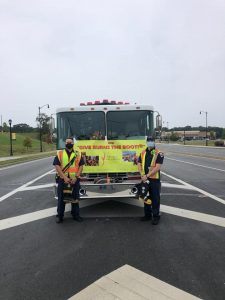 ir theme was “Strive For Five”, and that’s exactly what Hall County Fire Services did!  Hall County began their campaign virtually along with many other departments across the State.  In spite of the pandemic, fundraising is still needed in order to sustain the programs & services much needed in the burn survivor community, and GFBF encouraged the support of fire departments by participating in a virtual boot drive that would generate the much needed funds while remaining safe.

Having raised the most money over the last four years, Hall County was determined to make it five in a row, and as months went on and the world began learning more about living with COVID-19, Hall County made the decision to conduct a traditional boot drive in October with safety precautions in place.  Not only did Hall County “Strive For Five”, but 2020 has turned out to be the department’s historically highest year of money collected in their 20 years of participating in GFBF’s Give Burns The Boot® campaign.  Congratulations to Hall County Fire Services!