The Chesney Fallen Firefighters Memorial Grant Program was founded in memory of Gwinnett County career firefighter, Brant Chesney, who lost his life on December 27th, 1996, battling a fire as a volunteer with the Forsyth County Fire Department, and all other fallen firefighters who have lost their lives in the line of duty in the State of Georgia. Grants awarded under this program are to be used by fire departments in the State of Georgia to develop a new program or enhance an existing public life safety program, dedicated primarily to fire safety and burn prevention education. 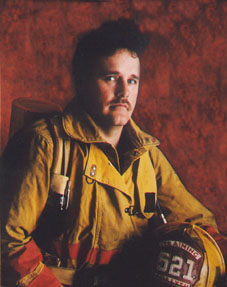 Gwinnett County Firefighter Brant Chesney always wore a smile and never met a stranger. Brant dedicated his life to helping and teaching others. He worked fulltime as a paid Firefighter with the Gwinnett County Department of Fire and Emergency Services, out of Gwinnett Fire Station #9 on C-Shift.

He was also a Volunteer Firefighter and Training Officer with the Forsyth County Fire Department and an adjunct instructor for the Georgia Fire Academy. He spent most of his off-time teaching firefighters from across the state.

He was also part of the Department’s Technical Rescue Team and taught members from both organizations about the techniques required to affect a confined space or high-angle rescue.

Brant also dedicated his life to teaching children about the dangers of fire and how to prevent and survive a fire. Among his many certifications, one that he used the most was his certification as a Fire & Life Safety Educator. Brant knew that he would be able to fight more fires and save more lives with words than with fire hoses and ladders.

Brant worked as an adjunct instructor in the school system and taught hundreds if not thousands of students about everything from fire safety to bicycle safety. He had a way of warming the hearts and captivating the minds of young people and leaving them feeling safe and protected no matter what the situation. Brant spent countless hours in the classroom sharing fire safety messages and demonstrating his firefighting equipment to children of all ages.

In December of 1996 Firefighter Brant Chesney lost his life while operating on the interior of an apartment fire in Forsyth County. A collapse occurred trapping Brant under tons of debris. Firefighters from Gwinnett, DeKalb, and Forsyth County Fire Departments worked for several hours to recover the body of their fallen comrade. They carried him out from the scene with his helmet on his chest. This was the same helmet he had allowed hundreds of children to wear as they learned about firefighters and fire safety.